CRAICNI WITH THE BIG GUNS 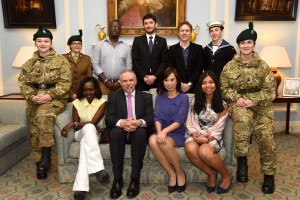 CRAICNI (Cultivate Respect, Appreciate Inclusion in Communities in Northern Ireland) based in South Belfast joined community organisations and educationalists at Hillsborough Castle this weekend for a lively lesson in the role of the Cadet movement in Northern Ireland.

The setting was the splendid and historic Hillsborough Castle where guests were invited to witness the traditional 21 Gun Royal Salute which marked the birthday of His Royal Highness The Prince of Wales. As is customary, the Royal Salute was fired by officers and soldiers from 206 (Ulster) Battery, Royal Artillery, drawn from Army Reserve units at Coleraine and Newtownards and, as the ‘big guns’ rolled out at Hillsborough, almost identical ceremonies were taking place at London, Cardiff and Edinburgh.

The ceremony showcased the high standards of military skills which are a trademark of the Army Reserves. On this occasion, the Cadet movement was also a focus of attention with teenage Cadets acting as hosts for the occasion and presenting information about the benefits and opportunities of Cadet life.

Cadet Company Sergeant Major Hannah Robinson said, “It was a bit daunting to take on a formal role, welcoming vip guests to Hillsborough Castle, but it was a good test of our claim that being a Cadet builds your personal confidence! Nervousness apart, we were pleased to have the opportunity to talk to so many people who influence young people’s lives and to thank those schools and community organisations which already give us such tremendous support and to tell others in the audience about the benefits that we all enjoy.

“Cadet membership is open to everyone and I think most people are well aware of the opportunities it provides for fitness, sport and outdoor adventure, but being a Cadet also helps you to earn valuable qualifications and achievements that will enhance your Personal Statement when you apply for university or improve your CV when you’re looking for a first job. I feel I’ve really benefited from my time in the Cadets, with loads of great experiences and, just as important, great friendships.”

Brian Sykes, Deputy Chief Executive of the Reserve Forces & Cadets Association, adds, “We are always pleased to place our young people centre stage and I think community leaders and educationalists enjoyed hearing about the Cadet Experience ‘from the horse’s mouth’. The Cadets certainly benefit from meeting new people and discussing issues of common interest and I think their confidence is considerably boosted when influential organisations such as CRAICNI demonstrate their openness and show how much they value the young people’s opinions. RFCA is looking forward to deepening its relationship with CRAICNI with the development of bespoke diversity training for the cadet organisations and our adult volunteers – an initiative which will support our inclusive ethos.”